In 1951, when the Territorial Air Defence was being organised, the threat of an atomic bomb attack was relatively low. Nuclear weapon was only in the hands of the United States (438 warheads) and the USSR (25 warheads), moreover the prime carrier of such weapon were aircrafts, whose reach was limited, and air defence allowed to fight them before reaching the target. Therefore, the guidelines for the Territorial Air Defence did not mention nuclear weapon, whereas shelters and protected spaces were described as air-raid shelters.

The situation changed in the second half of the 1950s due to a sudden increase in the number of nuclear arsenals and the development of rocket carriers. When the Territorial Air Defence began in 1956 to develop a nuclear defence conception, USA had already 3,692 warheads, USSR – 426, and UK – 21. In 1959, when the regulations adjusting the Territorial Air Defence to the new threats were introduced, the numbers were as follows: USA – 12,298, USSR – 1,060, UK – 35 warheads.

Thus the requirements for protective structures, which were supposed to protect also against the effects of nuclear weapon (shock wave, thermal and initial nuclear radiation) at particular distances, were extended. Shelters constructed at the turn of the 1950s and 1960s were to protect against direct effects of a nuclear explosion, yet still it was planned that people would stay there for approx. three days, which limited the protection against radioactive contamination.

Shelter construction alterations consisted mainly in increasing its strength to the effect of overpressure that occurs during an explosion. Strength parameters of walls and ceilings were slightly improved, yet it was the construction of ventilation system that underwent the greatest advance. In earlier solutions, air from intake vents that were located on the façade of the building reached directly the filter set In an event of a rapid pressure increase, it could lead to their explosion and contamination of the shelter. A new solution was introduced where the intake vent was located in the emergency exit tunnel, while the emergency vent – on the façade, just as before. Also a new element of the system was designed – two expansion chambers where additional stone and dust filters were installed. Using expansion chambers allowed to decrease the air pressure that reached the filters and protect them against damage. They also provided for the initial air clearing from dangerous dusts. Placing the intake vents in the emergency exit tunnel forced also a modification in the construction of the exit. In earlier solutions it was covered with a steel or concrete hatch (that was supposed to be removed in periods of danger), while the new solution included concrete structures located over the ground level, with side walls covered with net that ensured free air flow to the vent. 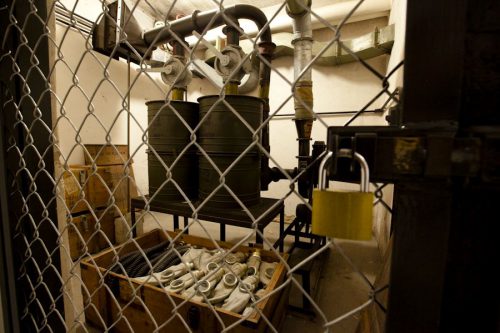