There have been many myths surrounding the shelters of Nowa Huta. One of them says that below the entire district is another, underground city, where it is possible to move around without going out to the surface. One may still meet people claiming to have entered the underground in one neighbourhood and leave it in a completely different one. Also, rumour has it that under the former Światowid cinema (currently the seat of the Museum of Poland under the Communist Regime) there was Nowa Huta’s largest shelter for several hundred people. And, obviously, all shelters in Nowa Huta were, allegedly, to protect against nuclear explosion. We decided to come to grips with those myths, to tell about the circumstances of constructing the majority of shelters below Nowa Huta – the political climate of the 50s in Poland and abroad, the Cold War, arms race, as well as a real threat of the outbreak of World War 3 and how the authorities used it for propaganda. Although it was beyond doubt that an open conflict between the East and the West was at some points of the 20th c. pretty much real, the authorities deliberately demonised the threat. In the face of a common enemy it was much easier to consolidate the nation and the vision of war allowed to justify the often criminal actions of the Secret Service, aimed at any and all signs of resistance activity, by protection of the country. 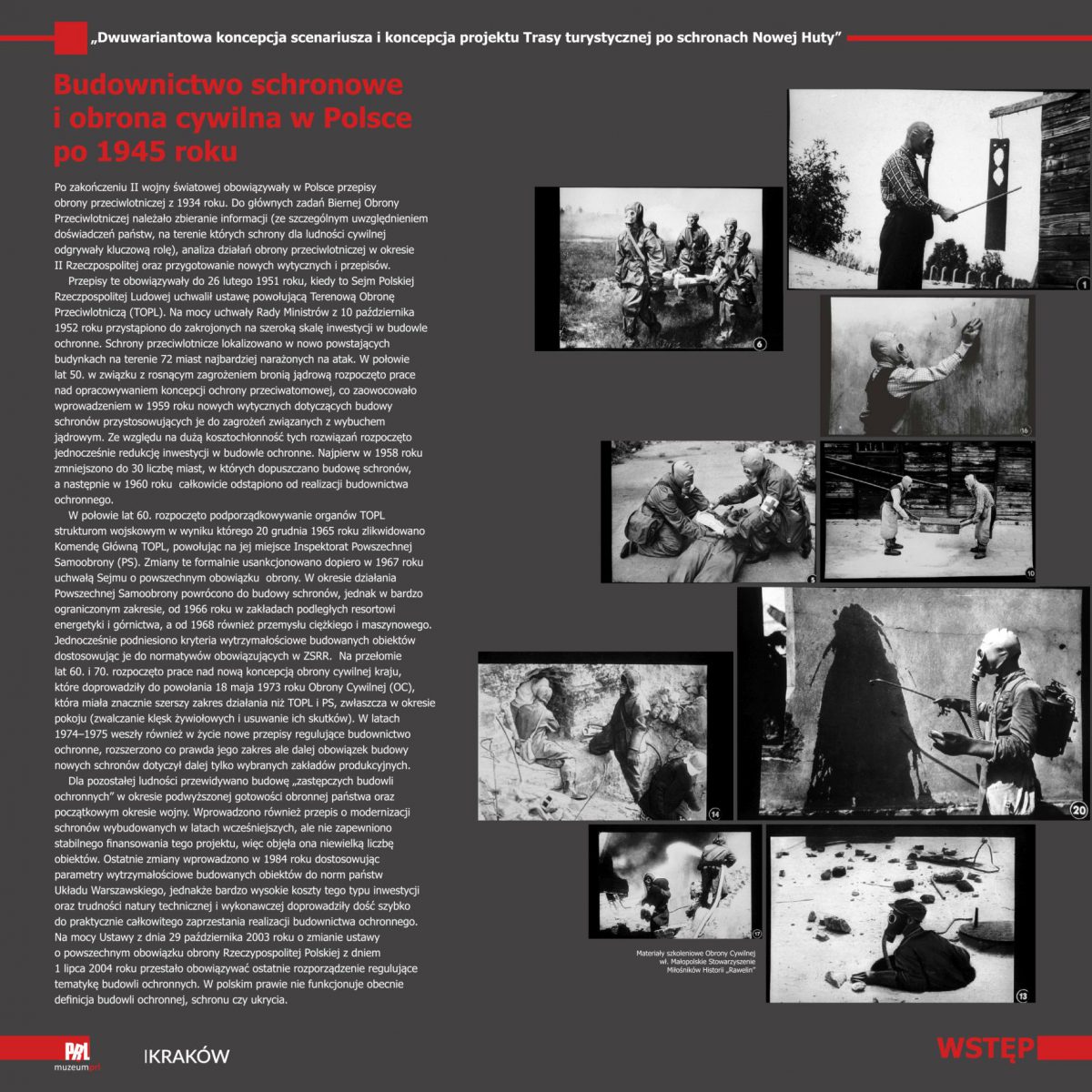 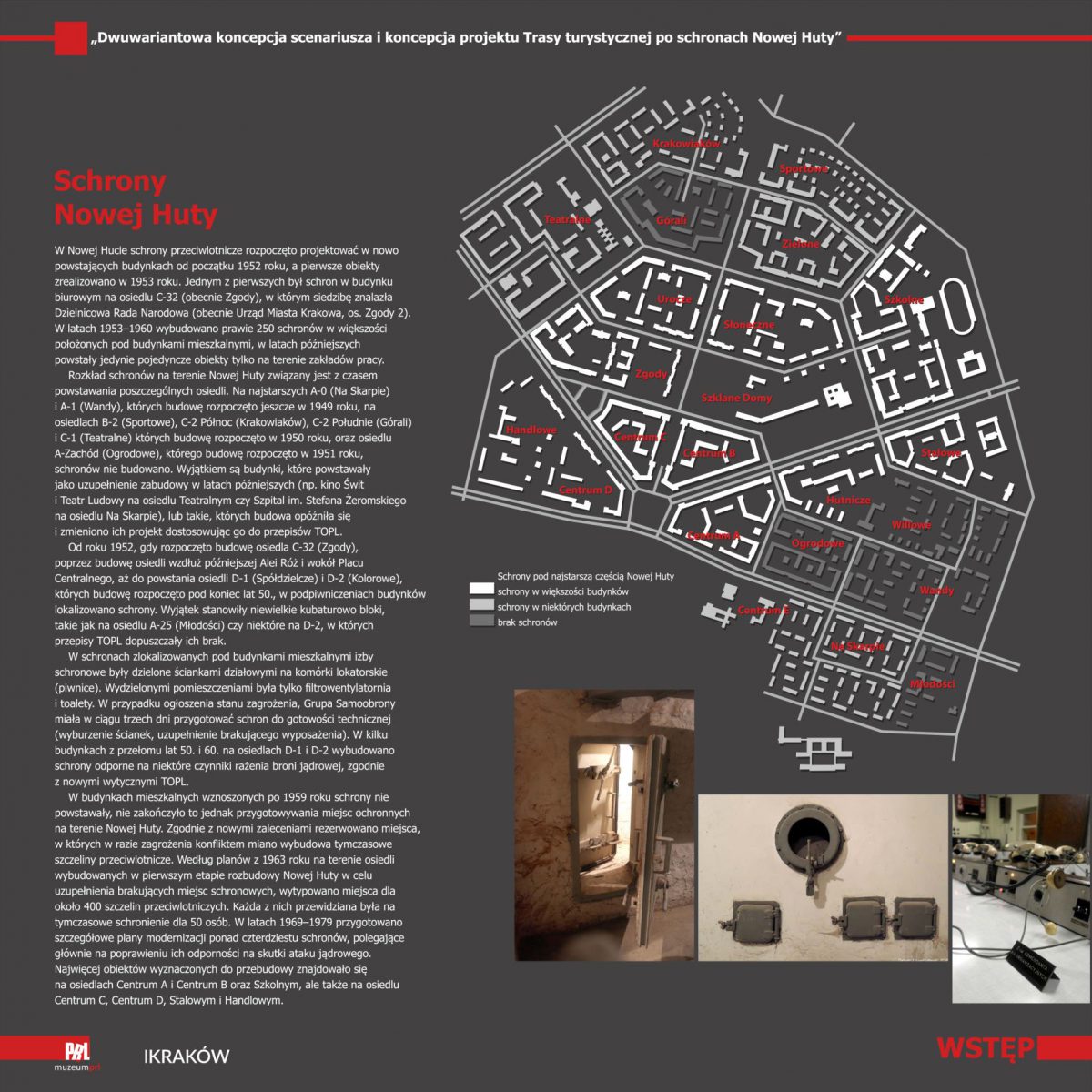 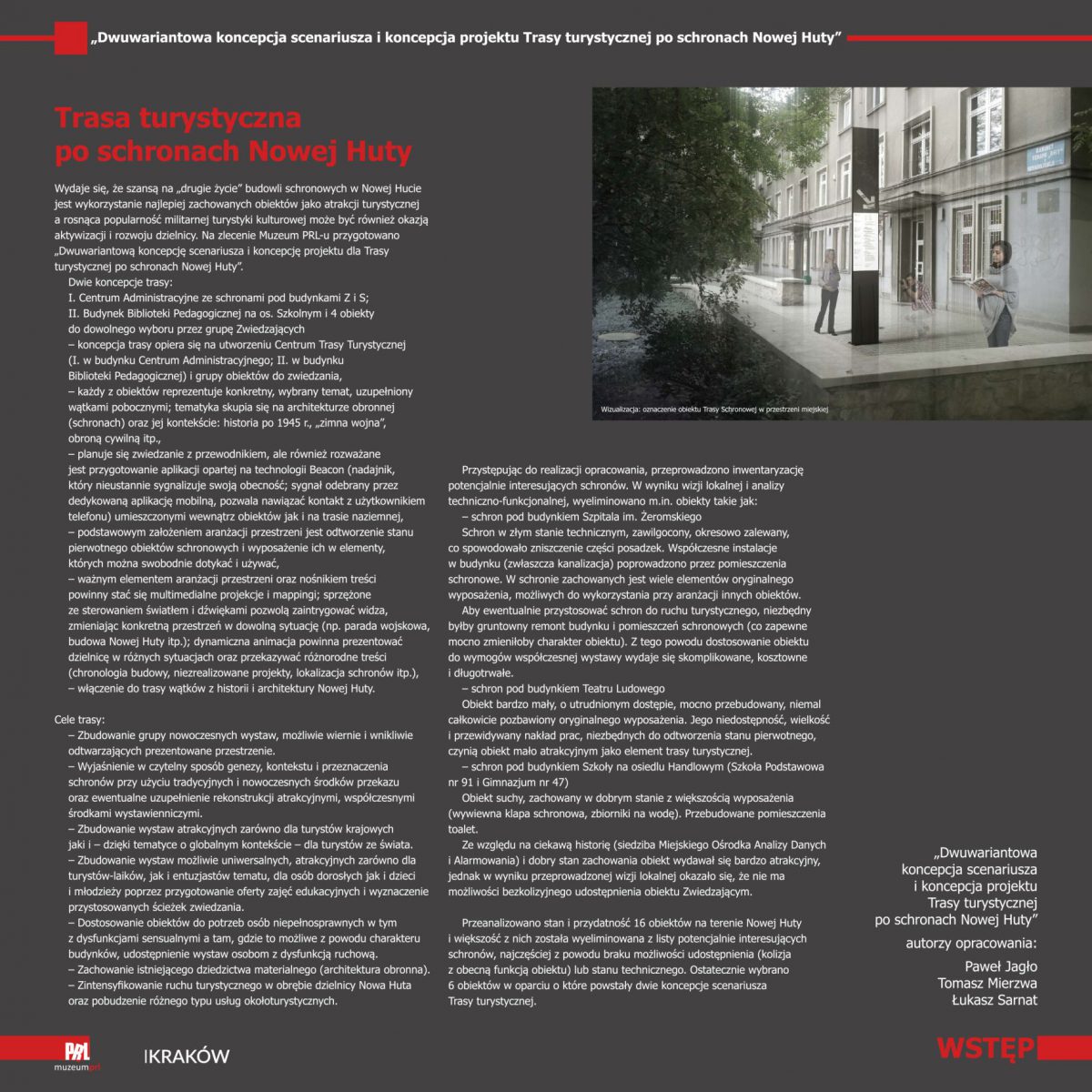 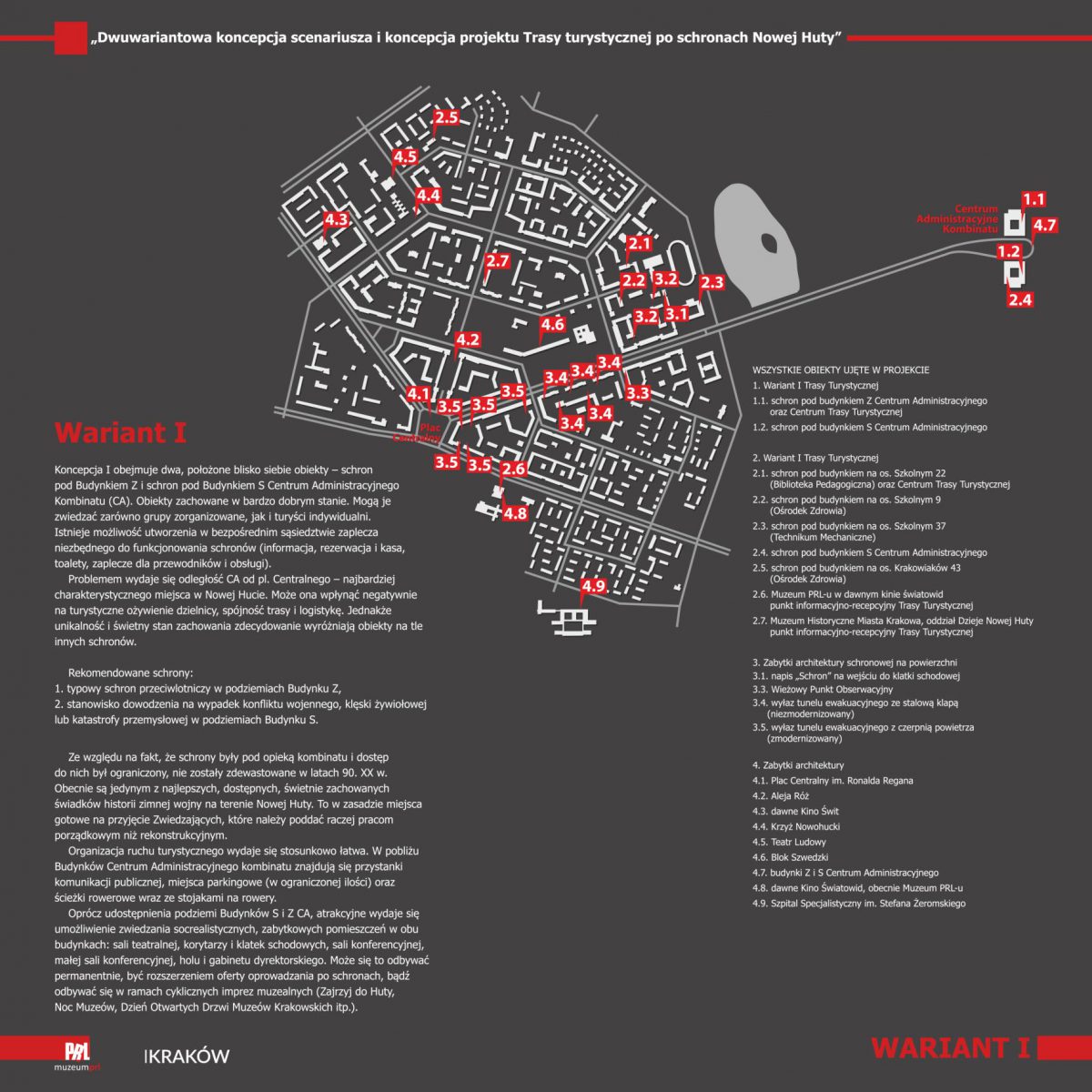 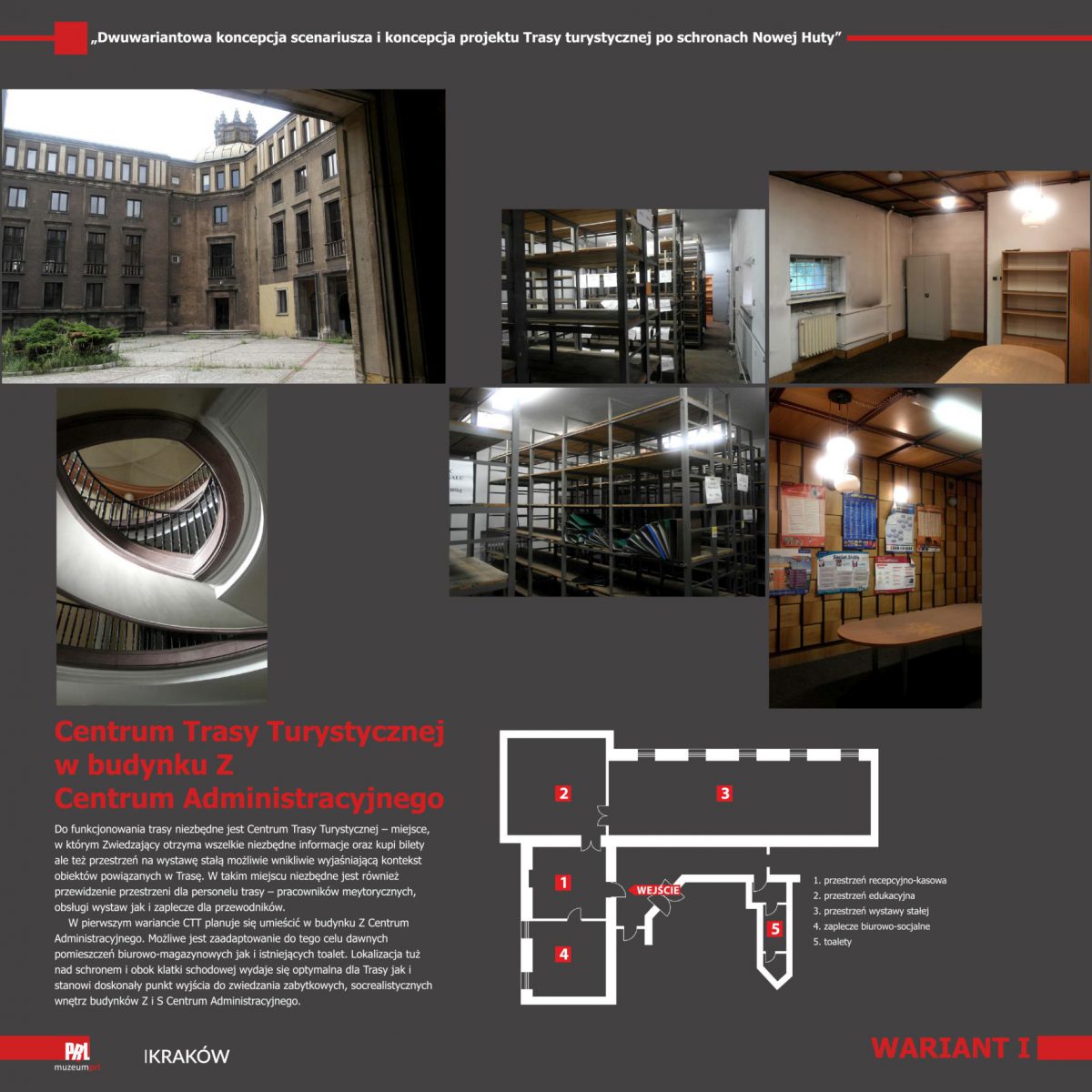 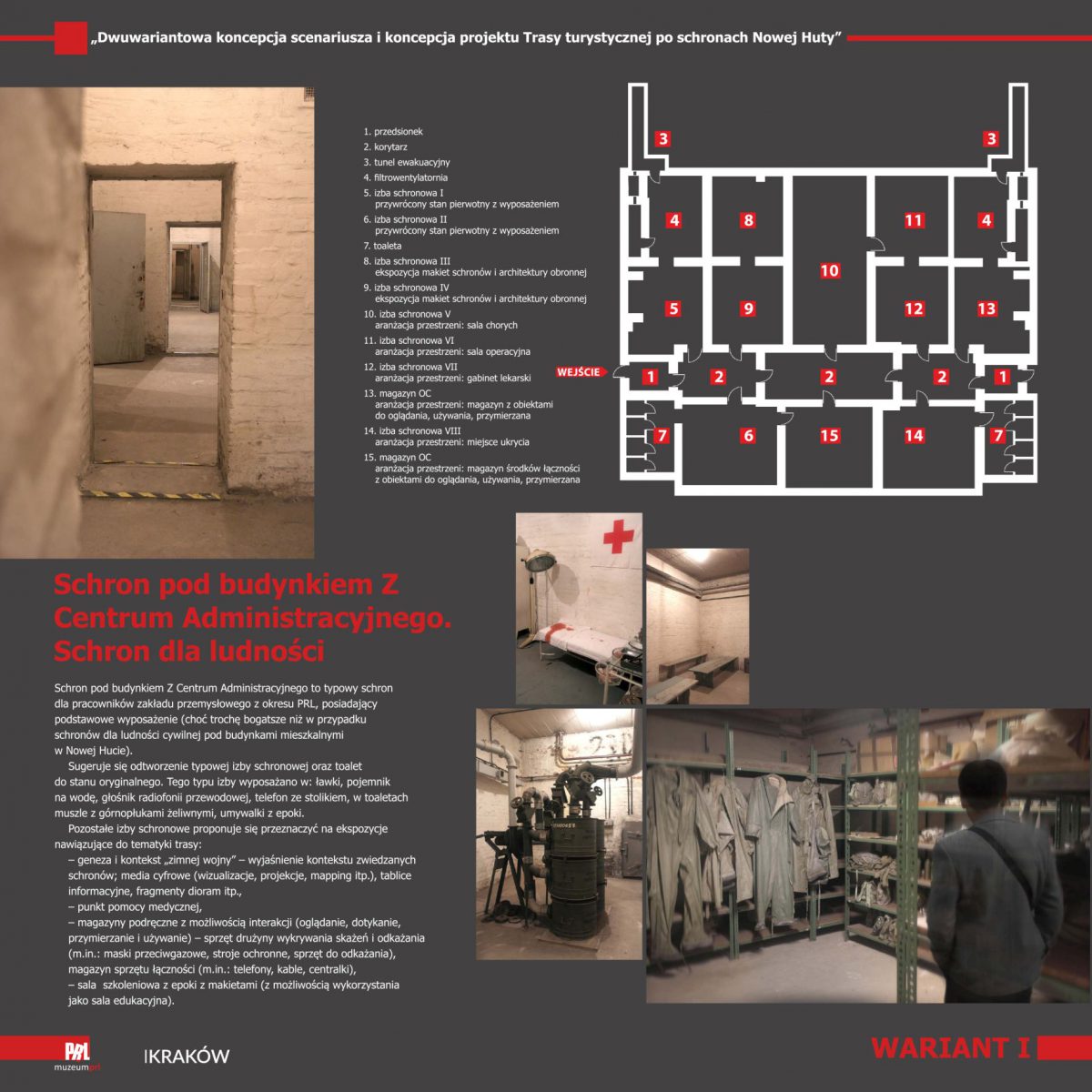 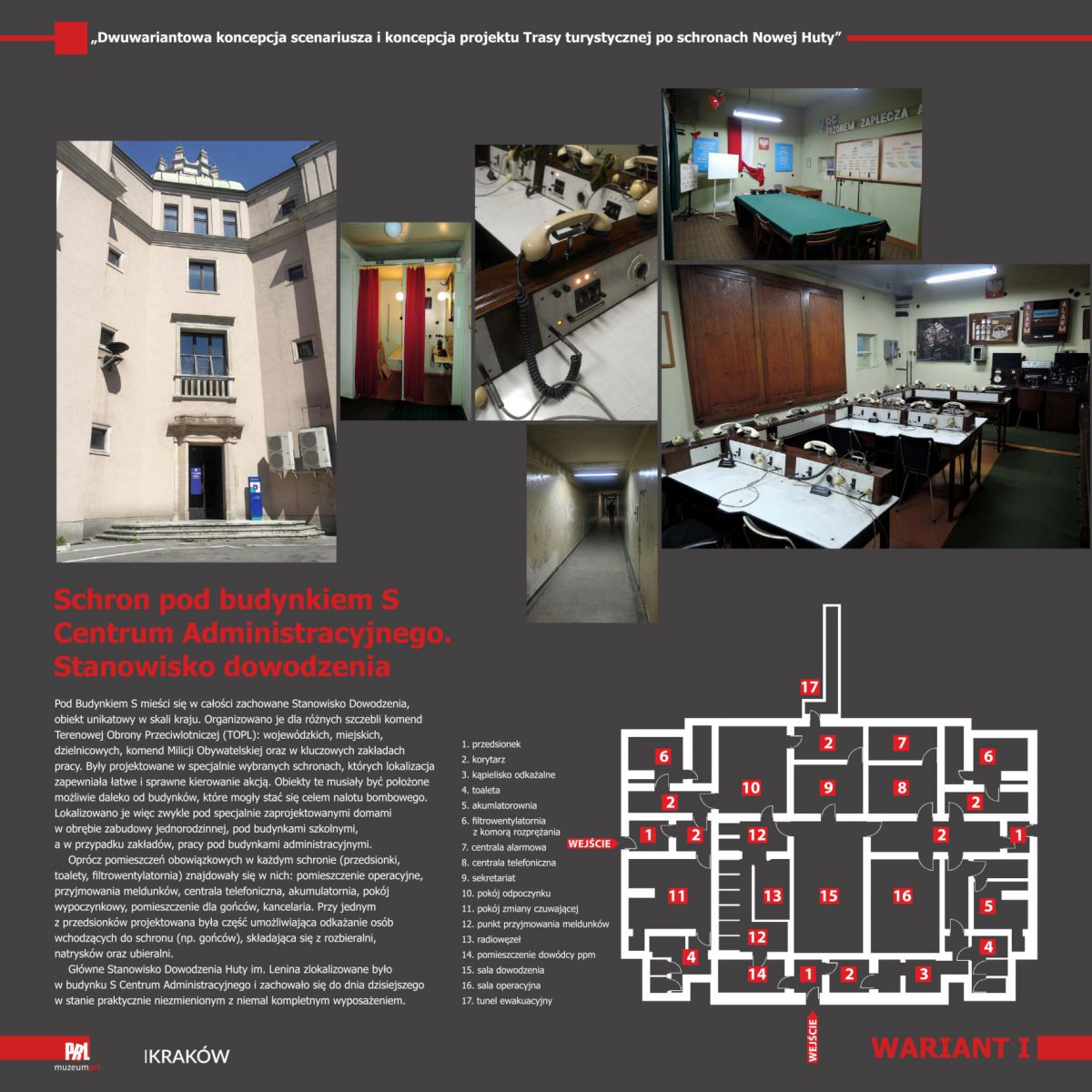 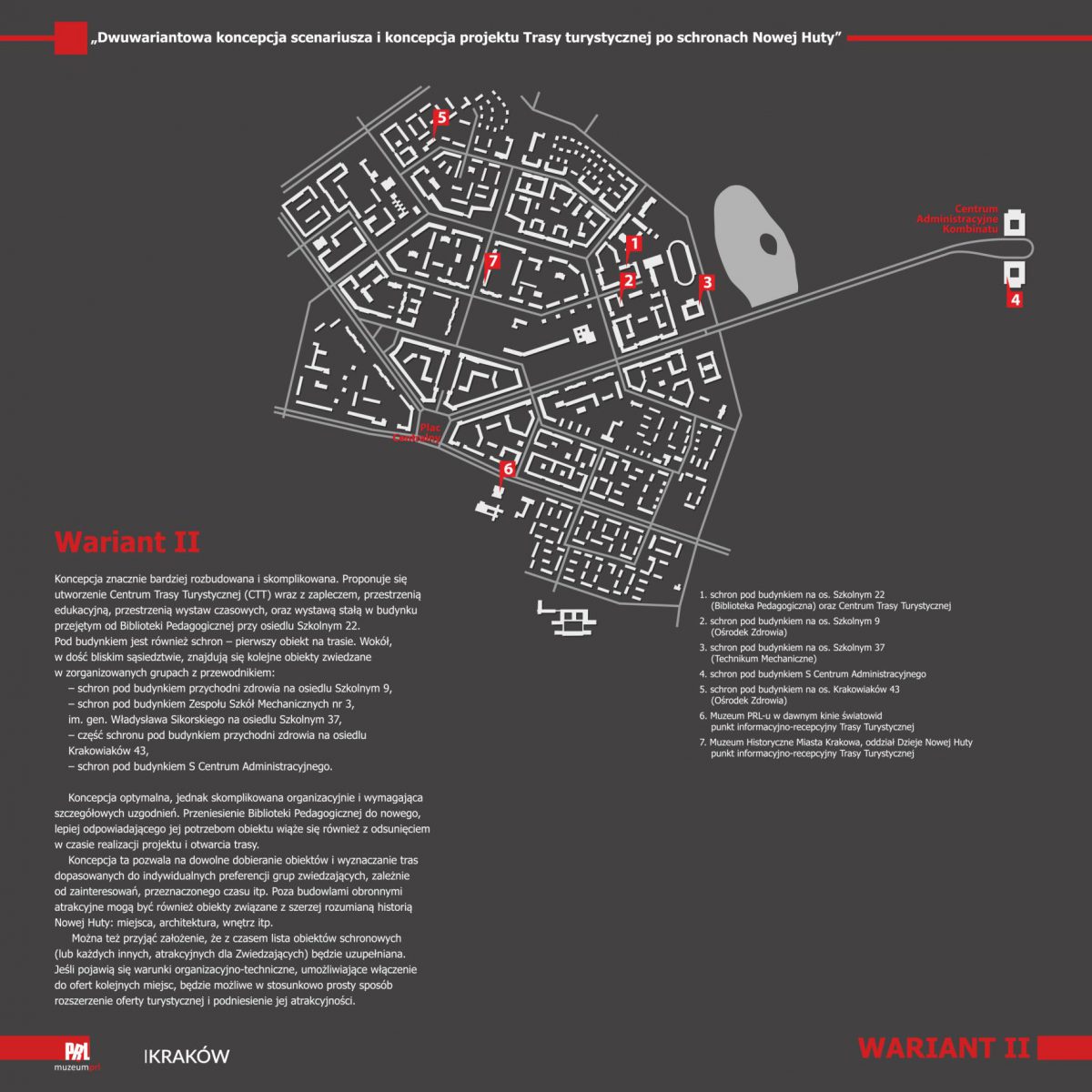 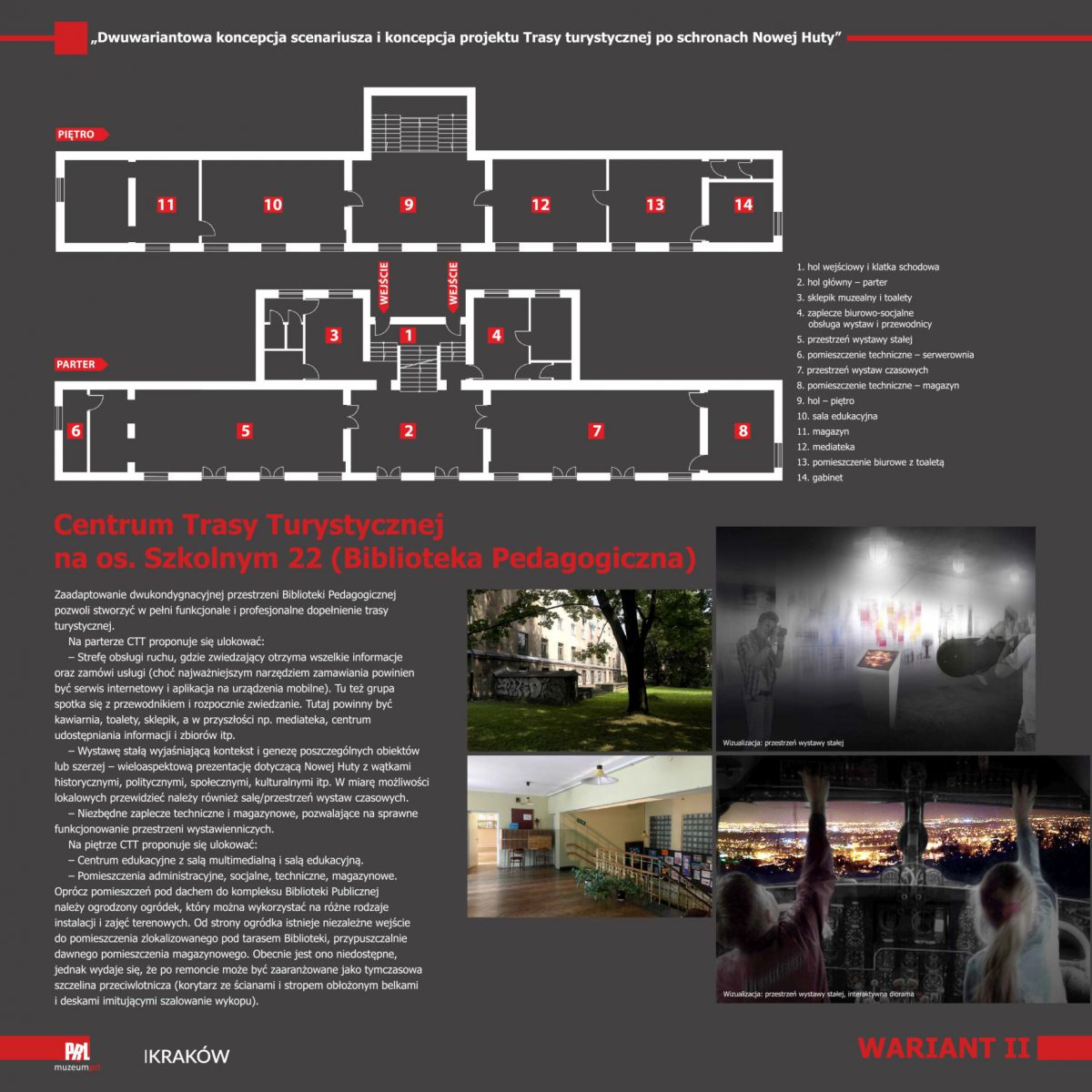 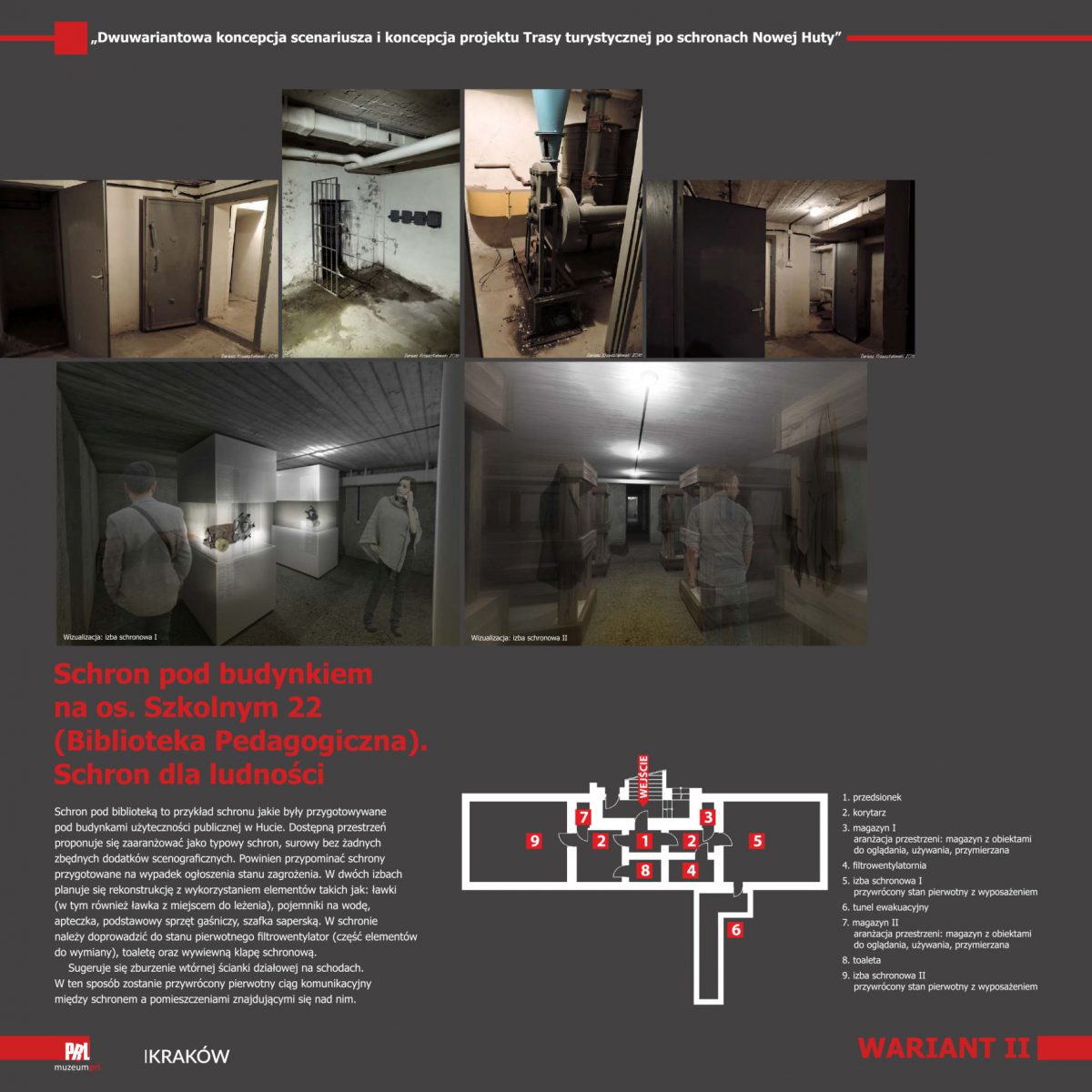 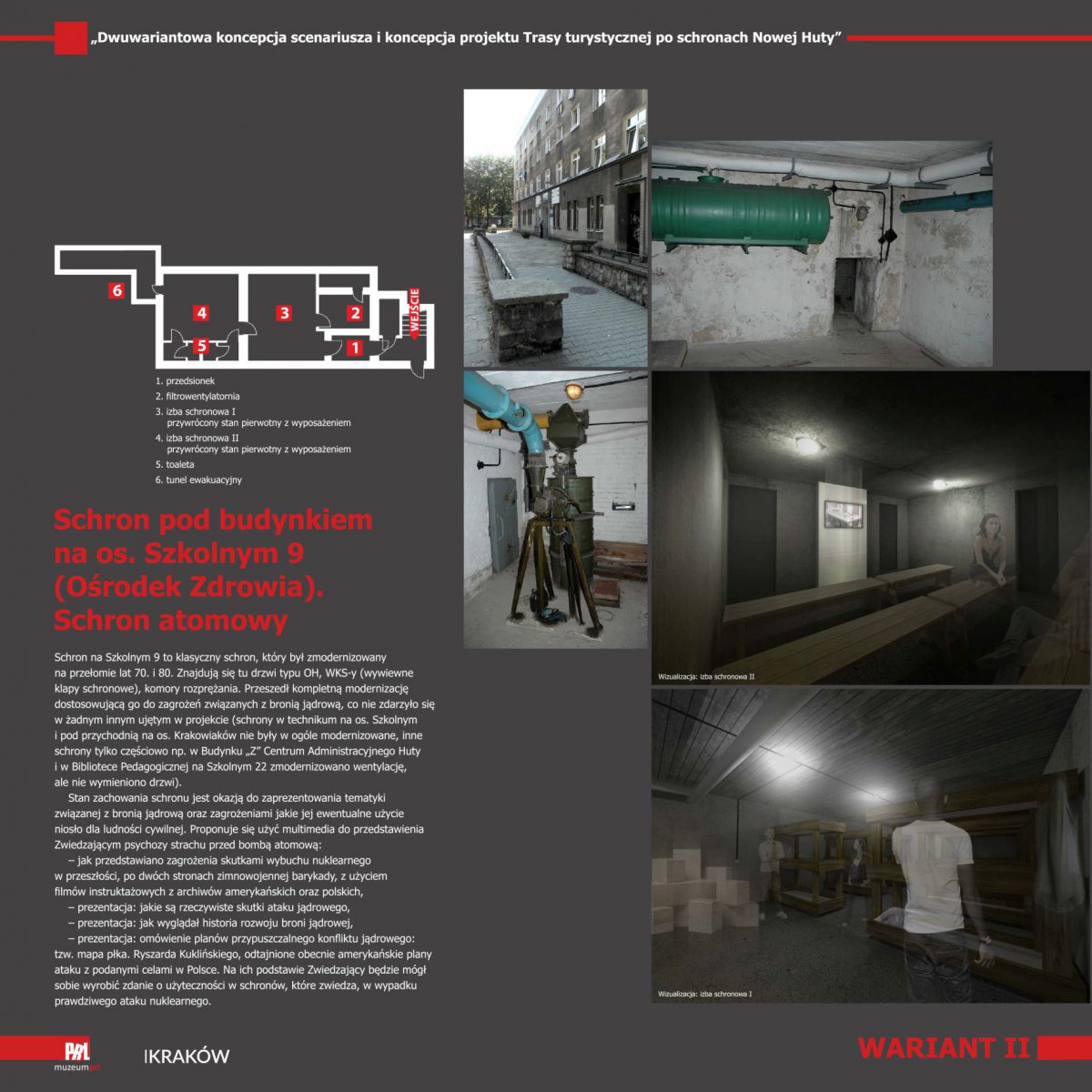 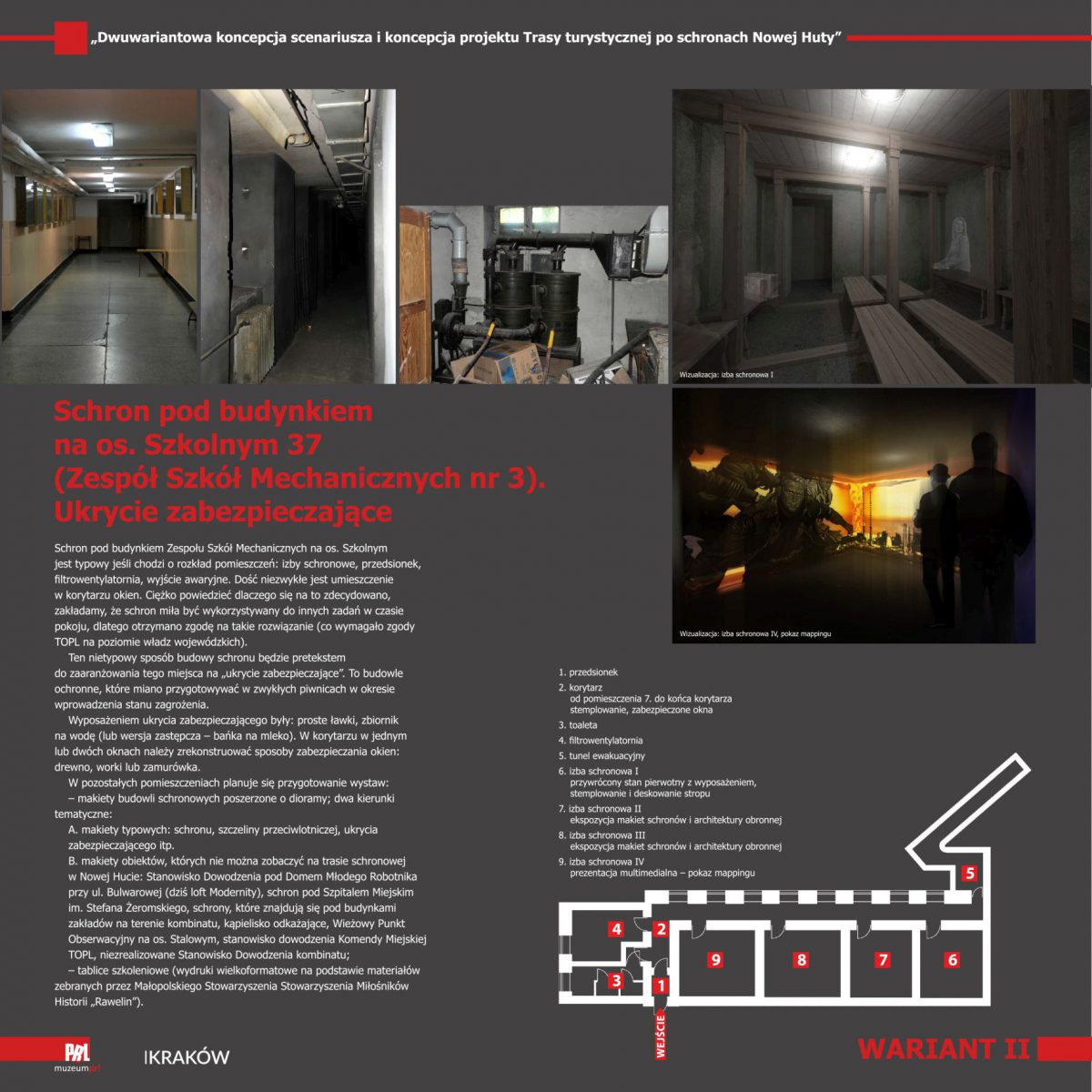 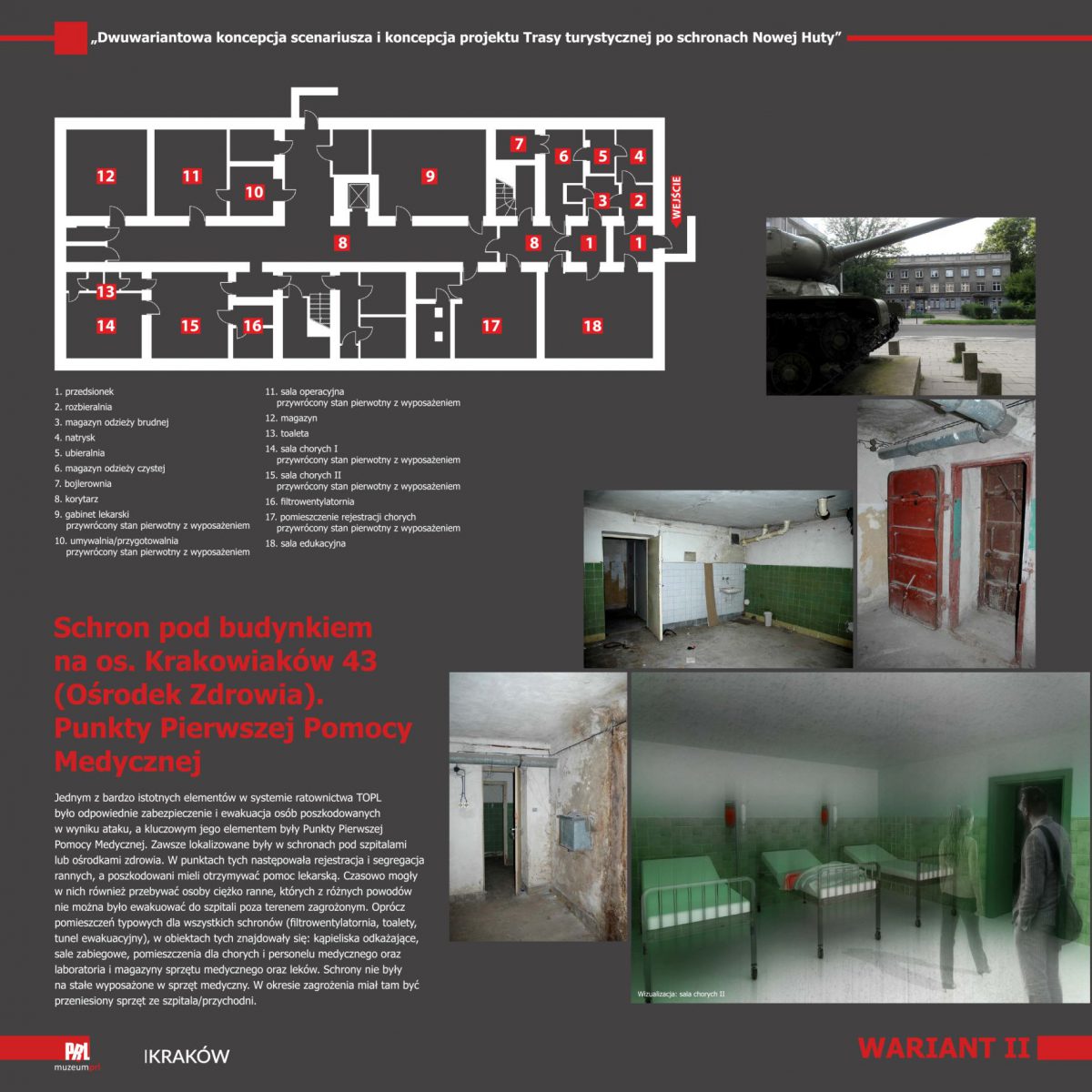 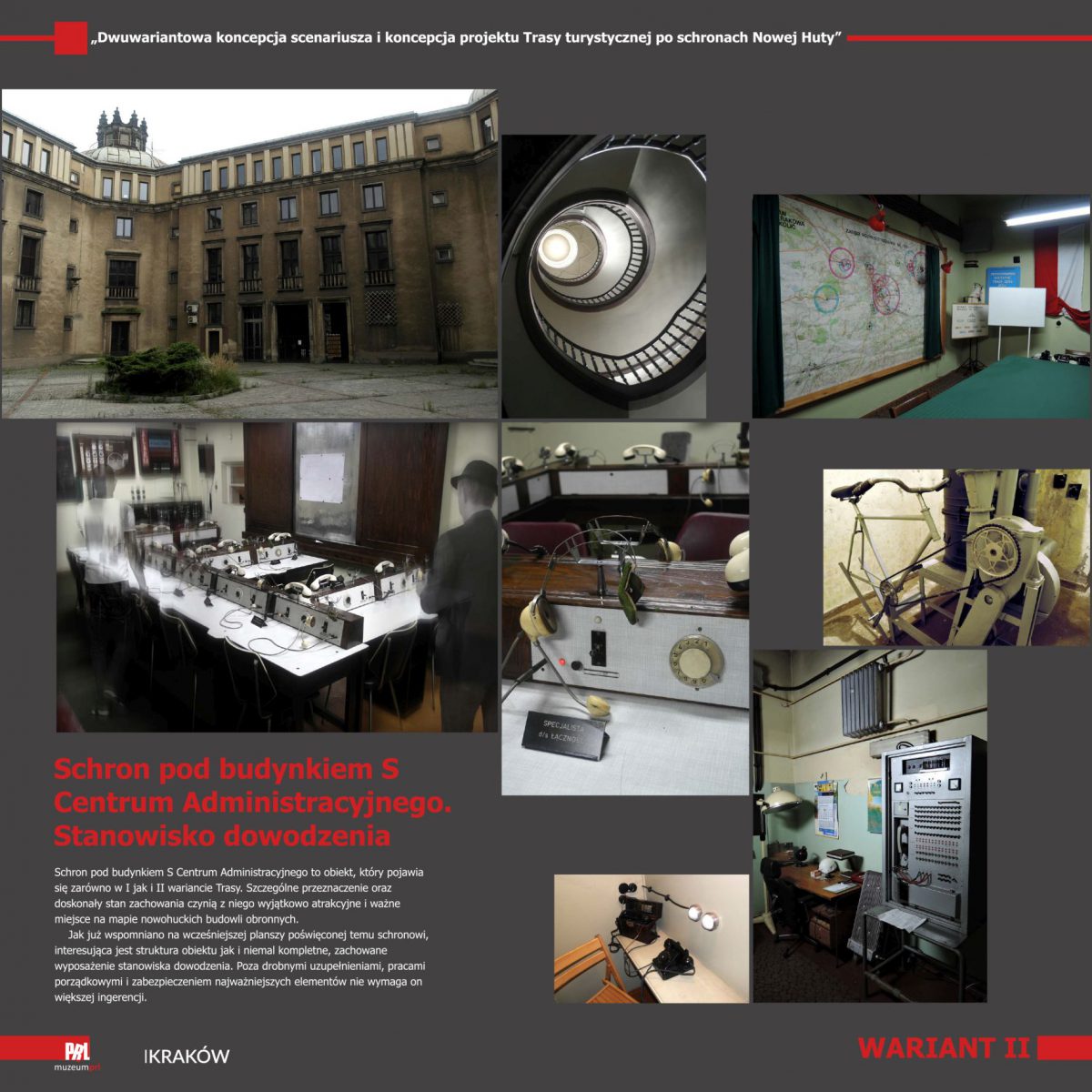 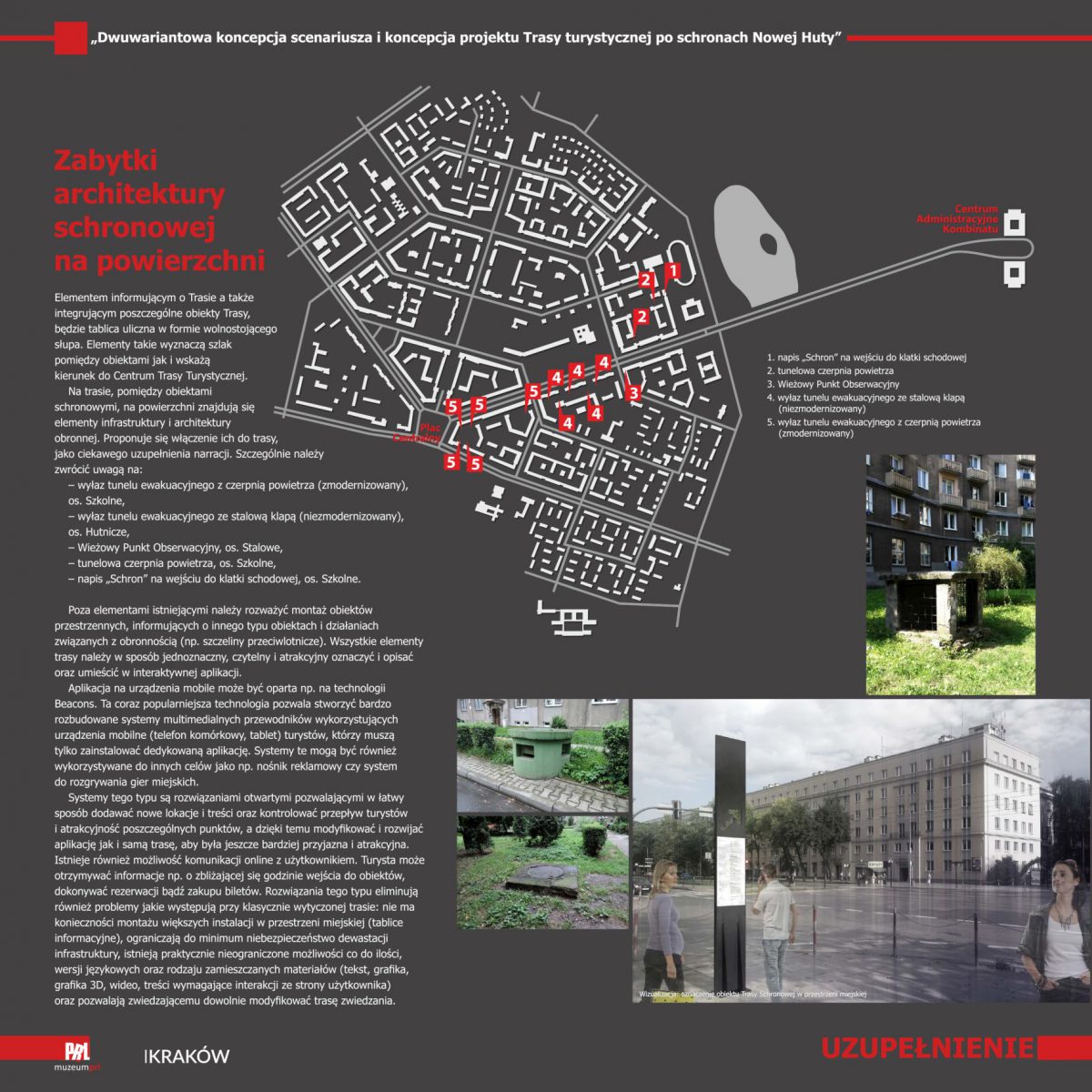 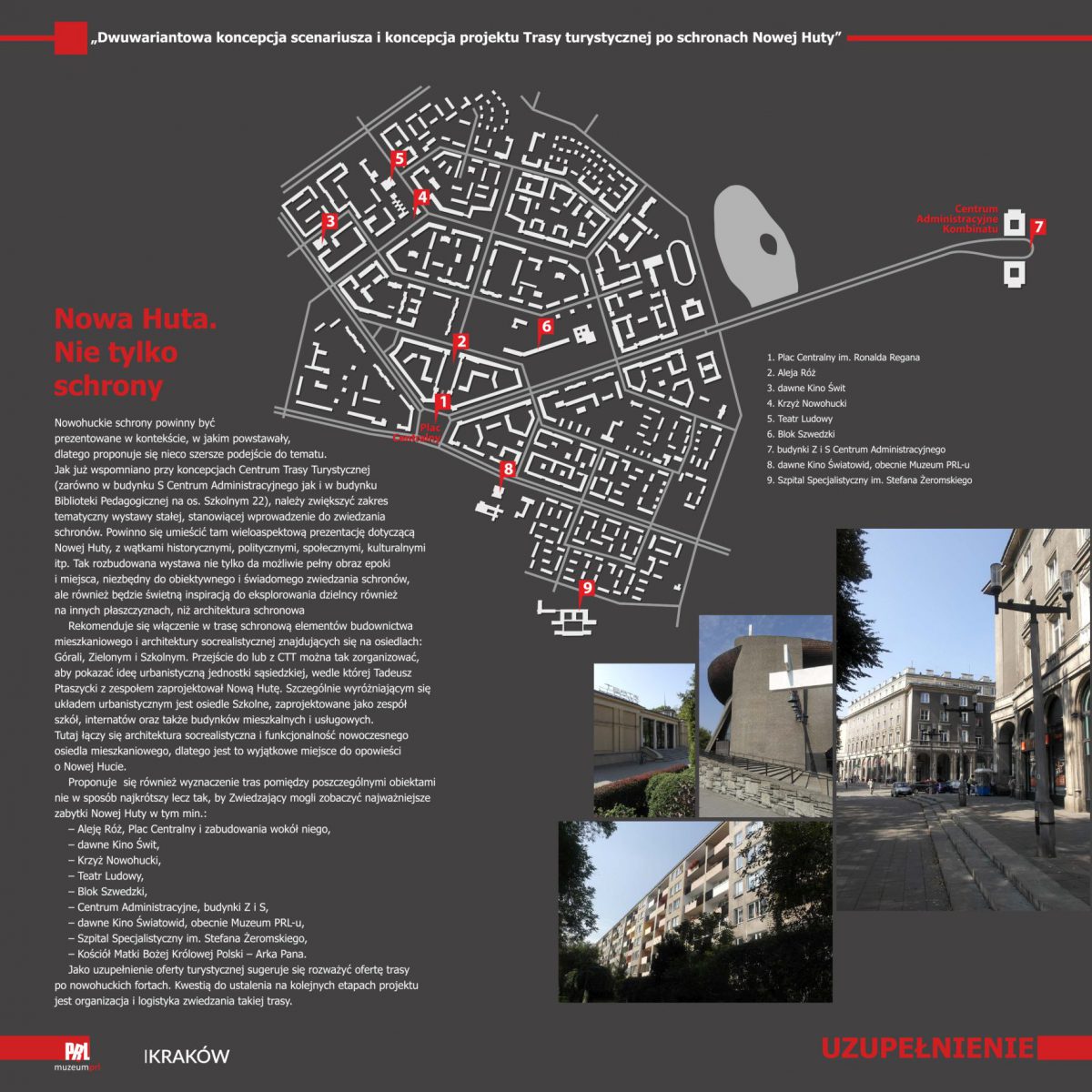 Today, for most visitors of the Museum of Poland under the Communist Regime, they are only a historical curiosity. The story of over 250 protective structures located under blocks of flats, schools, kindergartens, health centres or cultural institutions in the heart of Nowa Huta appeals to people’s imagination. Yet, while talking about them, it is difficult to forget about the very current context. The Russian invasion on Ukraine and the helplessness of international institutions (organisations) caused that while we were still working on the exhibition a “new Cold War” was openly mentioned.

In September 1939, Poland was attacked by the armies of Nazi Germany and the Soviet Union, and its territory was divided between the occupants. The rightful authorities were forced to leave the country – the seat of the Polish government and President was now in London. Back in Poland, under the ruthless terror of both occupants, conspiracy structures of the Polish Underground State, loyal to the rightful Polish authorities, were established. The newly formed bodies included: civilian Government Delegation for Poland – the supreme administrative authority, Home Army responsible for armed fight, and in following years – the Council of National Unity serving as the underground parliament. In June 1941, the Third Reich breaks the alliance with the Soviet Union. The German army attacks and marching east it reaches the outskirts of Moscow. Thus, the entire territory of the pre-war Poland comes under the control of the Reich. In order to guarantee themselves an impact on the situation in the occupied Poland and to establish a counterweight for the London government, the authorities of the Soviet Union delegate a group of communists to the occupied Polish territory. In January 1942, they form a Moscow-dependent Polish Workers’ Party. It forms its…

Cold War was the period following World War 2 until transformation in the Eastern Europe and the dissolution of the Soviet Union. That time was characterised by major tensions between two powers and their allies and satellites, not crossing, however, the red line of an open conflict between the USA and the USSR. The term “Cold War” was used for the first time by Herbert Bayard Swope while penning the speech delivered in 1947 by Bernard Baruch, advisor to the President of the United States. It was later popularised by an American journalist and writer Walter Lippman in his books and articles referring to the US politics. Cold War had various stages – time of relative peace intertwined with periods balancing on the verge of military confrontation.

At the turn of the 40s and 50s, the Polish propaganda exploited particularly intensively slogans of “fight for world without war”. Its blade was aimed particularly at the accused of “imperialism” Americans and the suspected of “neo-fascist” attitude authorities of the Federal Republic of Germany. On the wave of the “fight for peace”, employees undertook “peace guards” at their workplaces, during which they made production commitments and offered their services “after hours”. During celebrations organised by the state authorities, one could spot such slogans as: “Bierut – Stalin – Peace”, “As an answer to atoms, we construct new homes” or “Peace shall conquer war”. Also newspapers informed of the necessity to fight for peace, saying about “tonnes of steel and wagons of coal being a blow against warmongers”.

Shortly after the end of World War 2, mid-war provisions of air defence applied in Poland. On 26 February 1951, the lower house of the Polish parliament (Sejm) adopted a law establishing the Territorial Air Defence. Pursuant to the resolution of the Council of Ministers of 10 October 1952, large investments in protective structures began. Air raid shelters were being located in newly erected buildings in 72 cities most endangered with an attack. In the mid 50s, in view of the growing threat of nuclear weapon, works on the conception of nuclear defence were initiated, which resulted in implementation of new guidelines for shelter construction. At the same time, due to the costliness of applied solutions, the number of investments in protective structures was reduced. First, pursuant to the resolution of the Council of Ministers of 15 February 1958, the number of cities was reduced to 30 and further on, by virtue of the resolution of the Council of Ministers on ceasing to apply the Territorial Air Defence regulations while constructing new building dated 29 September 1960, the implementation of protective engineering was entirely abandoned.

There were four categories of shelter strength. All protected from contamination, category 1 and 2 structures protected from direct hit by aerial bomb, while category 3 and 4 structures protected only from falling rubble and indirect result of an attack (shrapnels, blast accompanying an explosion). Category 1 shelters were dedicated for central authorities and command posts of Territorial Air Defence stations. They were the most resistant and the required minimum thickness of the reinforced concrete ceiling amounted to 275 cm. The most durable ones were supposed to provide safety during a direct hit of an aerial bomb up to one tonne of weight, however the majority protected against a bomb weighing 250 kg. Category 2 shelters used ceilings of minimum thickness amounting to 210 cm. Designed in office buildings of central authorities and state offices, political organisations, and health centres, they served also as Territorial Air Defence command posts at key workplaces, districts or Citizens’ Militia stations, as well as to secure particularly precious museum exhibits.